A little over a week ago, I had my first real trip outside of Singapore. A group of 14 exchange students hailing from all sorts of different parts of the Western world and myself went to the island of Bintan on the Riau Archipelago of Indonesia. Bintan is one of Indonesia’s 17,000 islands and only a short 45-minute ferry ride from the eastern side of Singapore.

If only that ferry ride was enjoyable…Our ferry captain must have been hell-bent on getting to the island so he could get some tasty… satay or something, but as a result, the entire ferry ride was as my friend Chris put it, “Dolby Surround Sound of people puking.” As soon as we passed through an armada of container ships entering the port of Singapore, the seas got rough. Our bow was popping up and down making nearly everyone on board sick. The job of the crew on the ferry was to hand out waxy blue barf-bags to the passengers. However, after 45-excruciating minutes, we made it to the island.

Here is my roommate Tommy (left) and our friend Ramin (right) prepping for our atrocious ferry ride.

Once we finally got past customs and found a taxi, we could venture to our weekend residence, The Nostalgia Yasin Bungalow. The catch was, it’s an hour cab ride through the Indonesian country/jungle-side before we got there. To be honest, it was probably the coolest cab ride I’ve ever been on. Our cab driver, “Martin,” was speedy and effective. He even let us play some music on his radio. We made a beer-stop at a road-side stand and ventured off to our bungalow.

The roads are crazy though. Groups of children walk with ease, families of four ride on a single scooter, (with toddlers perched on the handlebars) and people constantly pass one another even if there is oncoming traffic.

It was worth it once we finally made it to the Bungalow: 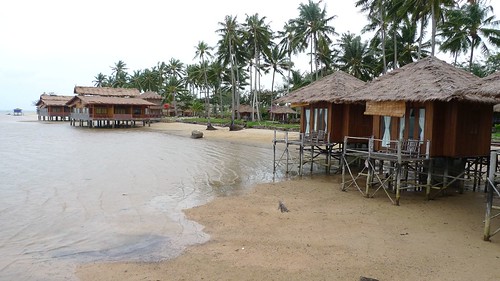 The bungalows were pretty nice and only cost us $22 SGD each for two nights. The hitch was we were supposed to get two rooms with four beds (for the 11 that first arrived), but they weren’t available, so they gave us four rooms with “two” beds. The trick is, the “two” beds was a single king-sized bed. I was able to really get to know Ramin in those two nights.

Bintan reminded me of the border town along the US-Mexico because of how they used currency. Singapore dollars were widely accepted next to the Indo rupiahs (which were 6,800 rupiahs to a single Sing dollar.) However, prices were generally inflated for Sing dollars in comparison to the Rupiahs. Because of that I changed about $50 SDH and received $340,000 rupiahs. schweeet.

Our first 24 hours at the Bungalow were fairly relaxing. Some people drank the (cheaper) alcohol, others read, some people played pool and other tried to enjoy the water. The problem with the beach was that by 11am the water receded from the bungalows to about a half-mile awaywhere the waves broken. No worries. There is always something to do.

A bunch of us rented a van from the Bungalow at a pretty good rate and we asked our driver to take us the nearby fishing village. The village was right on the water and made up of a couple hundred people living in houses built on stilts. 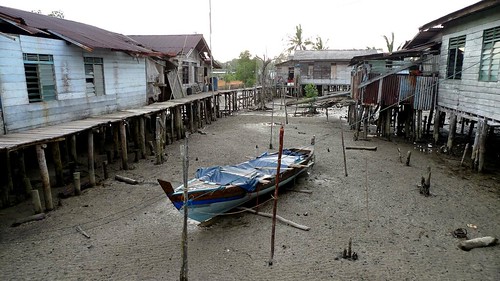 At first it was a bit intimidating being the Westerners with cameras glued to our faces to walk around. But our driver, a local, walked us around and introduced us to some families and other people. (Click to enlarge)

and a freaky monkey

Then there was this guy (on the left) who joked with us about taking pictures. I got him to take my camera a snag a shot, but after one picture he decided he would rather be IN the picture: 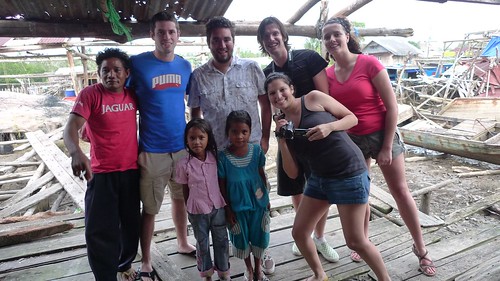 The kids in the village ran around the wood plank walkways (not in shoes mind you) like nothing. Some of them were pretty rickety. I managed to crack one of them moving a bit too quickly myself. Everyone in the village was very nice, especially one fisherman. If you check out the entire photo album of the trip on Flickr here you can get some interesting insights.

After the village we went back to the Bungalow and began to eat and drink under a little thatched hut until late at night.

Indonesia has an election coming up in April, and all 38(!) of the nation’s parties have flags and signs all over the nation to get attention. One party, Partai Kebangkitan Bangsa, known as the PKB, was having a butterfly boat race right next to the Bungalow to get some of the locals’ attention.

On that morning, the boats would catch the wind like nothing and jet across to the shore. Chris and I were hanging around watching the event when a man in a green polo and hat (the colors of the PKB) came up to us and wanted to take a picture with their camera. At first as I was unsure, because I had no idea what the party stood for, and I was surprised for a second, but I eventually conceded. Some other party members joined in on the picture and Chris, in his Kiwi accent, cracked “that will be on the billboards all over the island now!”

After doing some digging, I found out the PKB (which is sometimes known as party number 13) is a secular Muslim party that had a president in office in 2001 after getting the majority vote of 10.8%.

This post is getting kinda long, so you can likely get a better narrative from the Flickr photos: