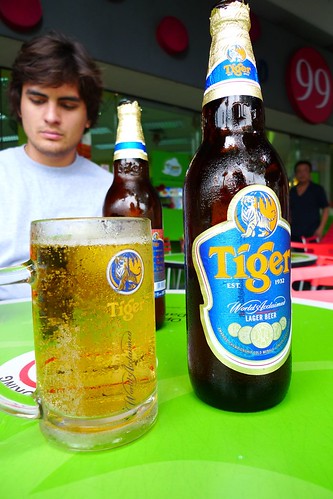 Six-packs of anything are impossible to find for less than S$11.50, which translates into about $7.25 USD.

While $7.25 may not sound that expensive for a six-pack of decent beer in San Diego like Firehouse Pale Ale, but when the cheapest beers are fairly watery lagers like the local Raffles beer, it’s not so good. Also, it’s really expensive next to the average cost of a meal. A decent meal at a hawker center anywhere in the city (that’s not downtown) will run you around S$ 3, or $2.05 USD, with a can of beer almost equal the cost.

Before I came to Singapore I knew alcohol would be expensive but I wasn’t sure how expensive. According to the Singaporean national budget site for 2008, hard liquor duties were S$30 per liter and the new excise duty is now S$70 per liter. Yikes…

I read elsewhere that beer is taxes roughly S$3 per liter but I can’t seem to find the link. Not so bad, I guess.

The taxes do work. All I can say though is that even on New Year’s Eve for me I curtailed my own drinking because I was unwilling to shell out S$8 for a 12oz cup of Tiger Beer.

Tiger Beer brings me to some good news!

Tiger Beer is the beer in Singapore. As pictured left with my roommate Tommy, a 24oz bottle of the locally brewed lager can range anywhere from S$5 at hawker centers to S$15 at high-end restaurants and bars.  It’s not a bad beer, and it’s fairly accessible. That’s one thing I find hilarious though. Licensing laws appear to be fairly lax and beer is sold almost anywhere food is, but it’s pretty damn expensive (in comparison.)

One thing I may have to do when I start traveling stopping in the duty-free shops. Some fellow exchange students (who were wiser than me) bought a couple bottles of liquor on their flight duty-free knowing the heavy taxes. I guess whenever I travel I’ll have to do the same. Just buy a couple bottles of something to have before a night out in Singapore. The trick is, you can’t bring duty-free booze from neighboring Malaysia, by Singaporean law.

But there is always the Mayflower Cafe and Pub on campus, which is the university staff club. Speaking with other students (and based on my own experiences there so far) only the Western exchange students seem to hang out there, not the staff.

With cans of Singaporean Anchor Beer and Thai Chang Beer for S$3, it makes for a fairly active hang-out. They do offer some nicer beers like Hoegaarden for S$6 a bottle, if you are feeling like actually enjoying a beer, but it still makes for a great environment.

On the flip-side, my goal is to find a dank, smelly bar somewhere near the docklands of the island where salty old seadogs hang-out so I can tell stories that sound like lyrics to Tom Waits songs. To be honest though, I’m just looking for a place to enjoy a beer and play pool off-campus that’s not a tourist trap or crawling with exchange students.

Alcohol just isn’t big around here and I think that’s OK, and probably for the better. The drinking culture at SDSU is a little excessive (which is why I generally prefer bars away from campus and “bro-zones” like Pacific Beach,) so I think it will be a nice change of pace.

I think my next post will be about food, so as to not come off as a booze-hound.